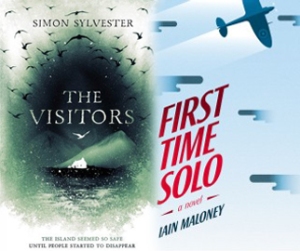 SIMON SYLVESTER is a writer, teacher and occasional filmmaker. His short stories have been published in journals, anthologies and magazines including Dark Mountain, Gutter, Valve and [PANK]. He’s a prolific  Twitter short story writer and his debut novel The Visitors is out in June 2014. It’s his flash fiction collection Marrow that brings him to Bad Language in May.

IAIN MALONEY  is a writer of fiction, non-fiction and poetry. He has been published in Stories For Homes, New Sun Rising, Cargo’s Very Short Stories, Latitude and The Hope That Kills Us. His debut novel First Time Solo is also out in June 2014 and contains WWII, RAF pilots and jazz. He’s over from his adopted country Japan on a national tour.

Every month, we offer ten open mic spaces for fiction and poetry performers for our event at The Castle (this month it’s May 28th at 7.30pm). Five spaces are reserved for those who have never performed at Bad Language before.

The open mic gang this month is: